Proclamation on Suspension of Entry

Ambassador Reinke Plants a Tree at University of Montenegro

Details for visitors on how to apply for a visa to the United States.

Study in the U.S.

Guidance on studying in the United States, exchange programs, and English language learning.

Jobs at the Embassy

The most recent job postings from the U.S. Embassy in Montenegro.

New at the Embassy

Information about new projects and programs at the Embassy. 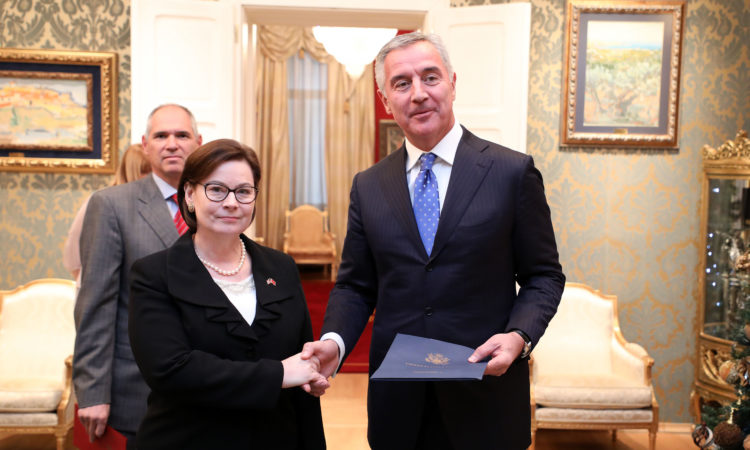 Friends, Partners, and Allies: The United States and Montenegro

Judy Rising Reinke, a distinguished American diplomat with decades of public service, presented her diplomatic credentials to President of Montenegro Milo Djukanović in Cetinje.  Ambassador Reinke is the fourth U.S. Ambassador to Montenegro since the country regained independence in 2006.

It was an honor to present my diplomatic credentials today to President Milo Đukanović. I look forward to strengthening the ties between our great nations as friends, partners and allies. #MeetTheUSAmbassador pic.twitter.com/bcYpjwvbdp

“The United States is proud to stand with Montenegro as a friend, partner, and ally,” Ambassador Reinke said.  “I look forward to strengthening the ties between our great nations by working with Montenegrin authorities and people of Montenegro.”

It was an honor to present my diplomatic credentials today to President Milo Đukanović @predsjednik_cg I look forward to strengthening the ties between our great nations as friends, partners and allies. 🇲🇪🇺🇸#MeetTheUSAmbassador

Ambassador Reinke announced as her top priority U.S. support for Montenegro’s further integration into Euro-Atlantic institutions.  She also pledged to expand economic opportunities between Montenegro and the United States by collaborating to stamp out corruption, increase trade, and attract U.S. investment.  She further noted the need to strengthen the people-to-people ties that serve as the foundation of friendship between Montenegro and the United States.

Learn more about the mission of the U.S. Embassy to Montenegro and the achievements of our partnership.