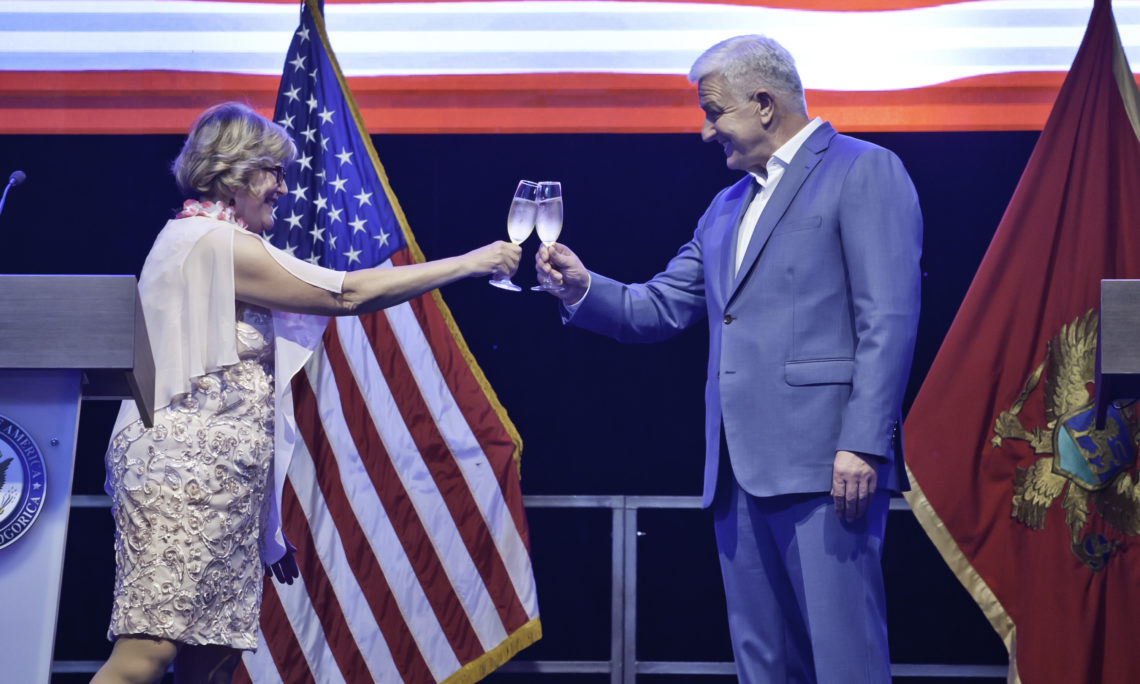 Yesterday we celebrated our Independence Day a little early. Thank you to all of our friends and partners for coming to the reception organized in honor of the 4th of July. This year celebration’s theme was bringing Hawaiian flair to Montenegro.

At the beginning of the celebration ceremony, Ambassador Margaret Ann Uyehara welcomed the guests:

Prime Minister Markovic, Colleagues and friends. Welcome to our Independence Day celebration, held before the 4th of July this year.

I am excited to share a little bit of the Aloha spirit with everyone today. Hawaii was the last of our 50 states to join the United States and serves as an important reminder of the diversity that lies at the heart of my country.  As many of you know, my husband is from Hawaii and he often says that Montenegro reminds him of many of his favorite places on the island of Oahu.

So this year, instead of a formal address, I thought I would share four Hawaiian proverbs with you that I think are particularly appropriate for Montenegro and the United States right now.

I’m pretty sure that Montenegrins know a few things about climbing tall mountains!

But it is not just about the mountains that form this lovely country and its dramatic landscape that you have climbed. Two weeks ago, Montenegro joined NATO as the 29th ally.

Once again, I want to congratulate all Montenegrins on this amazing accomplishment. Joining NATO is a huge step, but I know that there are even higher peaks, such as joining the European Union, to be scaled.

I am confident in Montenegro’s ability to climb any cliff, no matter how tall.

This translates as “No task is too big when done together by all.”

Montenegro has achieved great things in the past 11 years by working together and working with friends and allies.

Whether it is joining NATO, or establishing the rule of law or fighting corruption, or fighting terrorism and religious extremism – it takes hard work by everyone – government, the opposition, civil society, and ordinary citizens – to make progress.

The United States and the international community will continue to work with you to build a more secure, stable and prosperous future.

Third, I wanted to share the motto of Queen Kapi’olani – E kuulia i ka nu‘u – which means, “Strive to reach the highest.” This is good advice for everyone!

I think that it is important to both set lofty goals, but also to try to live up to our highest ideals and ethical standards every day.

Working together, we have achieved so much in the past 11 years, but now I want us to set our sights even higher. I am confident that in the next ten years Montenegro will firmly establish the rule of law and root out all forms and levels of corruption.

I hope that the economy will grow even faster with more and more American tourists coming here to experience the breathtaking beauty and history you offer. And more and more American companies will open up their doors, bringing with them jobs and expertise. I know that our relationship will continue to deepen and grow.

Finally, Ua ola loko i ke aloha – he alii ka la’i, he ha Ku’ulani na, which means, ”Life is an echo.  What you give out comes back.”  The more kindness and happiness you put out, the more you get in return.

I want to recognize the many members of our embassy family who, we would all agree, have given us so much during their tours in Montenegro.

John Asher, from the Defense Attache’s office, who has been a logistical genius here and coordinated all things great and small, including making the arrangements for our fabulous band at tonight’s reception.

Shelton Bowers, our General Services Officer, who is the logistics mastermind for the entire embassy.  Everything beautiful at our embassy is thanks to Shelton and his team.

Lynn Virgil, our management officer and head of our power team, who has coordinated every aspect of our embassy operations.  Her experience as a marathon runner has been good training for this position.

Mark Weinberg, head of our Public Diplomacy operation, has coordinated all aspects of our outreach – from our Access English language program, to our vigorous social media presence, to our interface with the Montenegrin press, to providing grants to civil society organizations.

And finally a very fond farewell to Deputy Chief of Mission Bix Aliu, who leaves in early August for Poland after several months of language training.  His dynamic leadership, honest commentary and perpetual optimism have made him a true friend and hero here in Montenegro.

Mahalo nui loa – Thank You very much for celebrating our 241st birthday. You are our Ohana – our family.

Thank you for this opportunity to wish the American people all the best on the occasion of the 241st anniversary of the Declaration of Independence, which established the Unites States of America.

Almost two and a half centuries ago this event changed the course of human history and marked a shift towards values which are considered ideal even today.

The Declaration reads „all men are created equal and they are endowed with unalienable Rights – Life, Liberty and the pursuit of Happiness. “

The modern world is very different from the world of the 18th century, except that a lot of people are still fighting for those unalienable rights. This only proves how great the ideals that Americans promoted were.

The role and the significance of the Unites States is summed up by a famous quote from President Kennedy:

„We do not want one nation or one system to rule the world, mankind should rule the world.  The modern world is too small and the weapons too destructive for us to allow anyone else to rule. “

The Montenegrin state was also founded on these ideas – the right to life and freedom, and that mankind should rule the world, and not any one nation.

Montenegrin-US friendship, which is over 100 years old, was also founded on this common ideal.

The strategic partnership of our two countries was crowned two weeks ago, when Montenegro, assisted by Allies and, most importantly, by the United States, became a full-fledged member of the North Atlantic Alliance – the most powerful military and political alliance today.

This partnership was further strengthened by a series of bilateral meetings during the last couple of months in Washington.

Montenegro feels honored and privileged by this partnership!

In that name, in the name of our future cooperation, and in the name of everyone who contributed to the Montenegrin-US partnership, allow me to wish President Trump, your esteemed Excellency and the American people, happy Independence Day!

We hope that we were able to capture the “Aloha spirit” and spread it through Podgorica and to all the people we had the pleasure of cooperating with during the past 365 days.  Following U. S. tradition, the reception ended with a fireworks display.