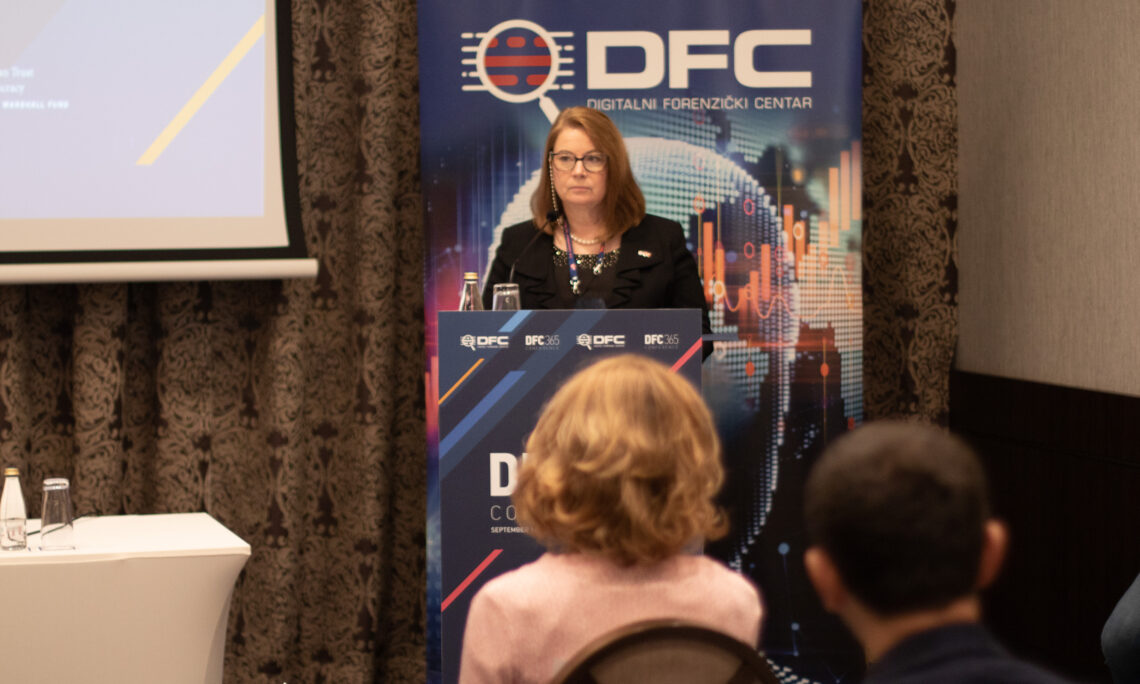 It is a pleasure to be here with you today as we mark the third anniversary of the Digital Forensic Center. I want to commend you, Savo, and the Atlantic Council of Montenegro for working tirelessly to promote Western values and to advance Montenegro along its Euro-Atlantic path. The work the DFC has done over the last three years to identify disinformation and to educate the public has been valuable for this country.

Today, I am looking forward to hearing about the research the DFC has done into Russia’s role in the Balkans. But, at the same time, I imagine there won’t be many surprises for those of us who closely follow the destabilizing role Russia plays in many countries all over the world, including my own.

The Biden administration is fully committed to holding Russia accountable for its reckless actions. For instance, last month, the United States, in concert with the United Kingdom, imposed additional costs on the Russian Federation on the one-year anniversary of the poisoning of Russian opposition figure Aleksey Navalny with a Novichok nerve agent.

We condemn the August 2020 assassination attempt on Mr. Navalny and subsequent actions intended to stop his efforts to criticize the Russian government, including his imprisonment in January 2021. Actions taken by the U.S. Departments of State, the Treasury, Justice and Commerce send a clear signal that there will be no impunity for the use of chemical weapons, including for the individuals and organizations involved.

While I could easily rattle off a list of Russia’s efforts to sow discord and wreak havoc on a global level, when possible, the United States will also seek opportunities for cooperation with Russia, with the goal of building a more stable and predictable relationship consistent with U.S. and global interests. We value our deep connection to the Russian people and will continue to support the protection of human rights and the advancement of democracy in Russia. The Russian people deserve much better.

So, knowing what to expect from the Russian government, based on their past track record both at home and abroad, it comes as no surprise that Russia would

eagerly capitalize upon what I see as the increasingly frayed social fabric here in Montenegro.

Let me say it plainly – as was evident during recent events surrounding the enthronement of Metropolitan Joanikije in Cetinje, polarization and divisions are increasing in Montenegro and this makes me deeply worried about the Euro-Atlantic future of this country. The scenes of anger, of fear, of division, that I saw last week, shook me deeply. I couldn’t believe that the country had reached such a dangerous point.

I fear that Russia, with its political and religious proxies from the region and inside the country, has found fertile ground in a deeply divided Montenegrin society to help its efforts to reverse the country’s Western trajectory and derail it from its Euro-Atlantic future. My friends, we cannot let that happen.

We must look to the Government of Prime Minister Krivokapic and his partners, Parliamentary Speaker Becic and Deputy Prime Minister Abazovic, to deliver on the promises they made a year ago to keep Montenegro on a Euro-Atlantic course, maintain key elements of Montenegro’s foreign policy, and prioritize the reforms needed to speed EU accession. At the same time, I urge President Djukanovic, DPS and other opposition parties to put the politics of division aside and to work in the public interest.

And, to both the Government and the opposition, I would point out that a Euro-Atlantic future is one that you have all chosen as the right way forward for Montenegro; focus now on finding areas to make progress on this shared goal and avoid those issues that you know cause long-term polarization, enflame tensions, and provide fertile ground for malign influence to wreak its effects.

Recent events should serve as a wake-up call for all those in Montenegro who simply want to live in peace and prosperity. To everyone who knows that EU membership will bring a brighter, more secure future for your country, stand up and voice your opinions. Demand that your political leaders seek common ground and constructive solutions rather than descending into divisive rhetoric.

Recent events have vividly shown us the dangers of disinformation, semi-truths, and unverified information. We saw once again the importance of a professional and ethical media and strong media literacy skills for a resilient democracy.

And so, while Russian-backed disinformation will undoubtedly continue to swirl in Montenegro, it will only be successful in so far that society is weak and divided.

The U.S. Embassy will continue to support projects designed to strengthen civil society, professionalize media, and improve media literacy skills in order to combat corruption, strengthen institutions, and build resiliency against foreign malign influence, including disinformation. Moreover, all of the projects we support will promote diversity and inclusion.

We will continue to support English language learning and educational exchange, in addition to strengthening our economic ties. In fact, later this afternoon, I will participate in the launch of the first U.S.-Montenegrin Economic Dialogue, as a platform to deepen that engagement.

This is where the focus should be. On the economy. On education. On providing opportunities. On getting the pandemic under control. Not on divisive issues, like a census, which is being cynically championed by those who hope they will be able to further divide the population among “us” and “them.” Their gain is this country’s loss.

The United States stands ready to support the establishment of a constructive dialogue, which should include both political actors and civil society representatives, to help forge consensus to advance Montenegro along its Western path.

But the international community cannot want a Western future for Montenegro more than it does for itself. The long-term success of this country is dependent upon the people of Montenegro.

So, the United States will stand by you, as a friend, partner, and ally, but the hard work of reconciliation, of making progress along the Euro-Atlantic path must be done by the citizens of Montenegro, with the full knowledge that those who wish them ill, from both within and without, will seek to thwart their efforts, including through disinformation.

Now is the time. Building on Montenegro’s proud tradition of interethnic harmony, those who seek a brighter future for this country must redouble their efforts to shape a democratic, inclusive Montenegro that is firmly rooted in Western institutions.