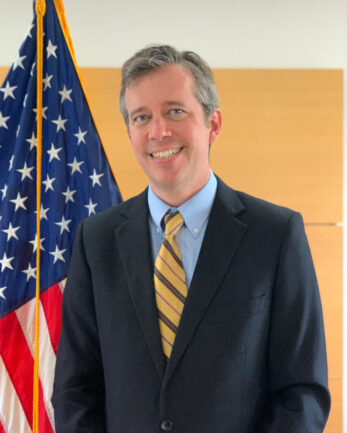 Chris Karber arrived in Podgorica in August 2020 to serve as the Deputy Chief of Mission of the U.S. Embassy. He is a career member of the U.S. Senior Foreign Service.

Prior to his current assignment, Chris was Deputy Director of the Regional Support Center at the U.S. Consulate General, Frankfurt, 2016-2019. He has served abroad in Bulgaria, Portugal, Mozambique, Brazil and India. In Washington, Chris has served as a country desk officer, a special assistant, and a post management officer. He has studied Montenegrin, Bulgarian, and Portuguese.

Chris was born and grew up in Arkansas. Prior to joining the Foreign Service in 1998, he worked for the American Red Cross in Denver and earlier in the U.S. Senate. Chris holds a Master of Arts in International Affairs from the University of Denver’s Josef Korbel School and a Bachelor of Arts in International Affairs from Emory University in Atlanta. He is married and has a daughter.