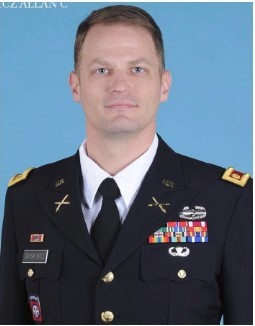 Lieutenant Colonel Allan Gryskewicz was born in Maryland and then moved to Pennsylvania as a teenager. He enlisted in the Wyoming Army National Guard as a Cannon Fire Direction Specialist in 2001 and subsequently earned a Regular Army Commission as a Field Artillery Officer through the Reserve Officer Training Corps at the University of Wyoming in 2005.

LTC Gryskewicz has served in numerous leadership and staff roles from the platoon level to the Combatant Command level. His most recent assignment was as the Executive Officer for the Vice Director of United States European Command’s Directorate of Plans, Policy, Strategy, Partnering, and Capabilities in Stuttgart, Germany. Prior to his assignment as an Executive office, Allan was the United States European Command Country Desk Officer for Israel and Cyprus. Previously, he served as an Infantry Battalion Fire Support Officer, Field Artillery Battery Commander, Field Artillery Platoon Leader, and an Infantry Rifle Company Fire Support Officer.

LTC Gryskewicz has received various awards and decorations for merit and valor.

Allan is a hobbyist photographer and marathon runner. He is married to the former Hannah DeWitt of Raleigh, North Carolina, with whom he has two sons, Zachary and Alexander.