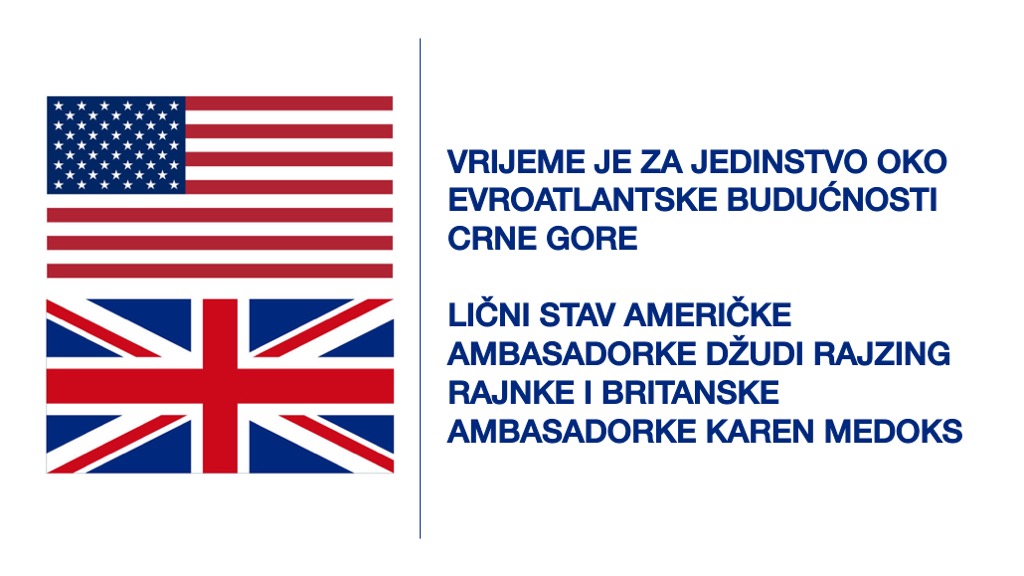 Members of the international community who care about Montenegro’s Euro-Atlantic trajectory were deeply shaken by the recent events surrounding the enthronement of Metropolitan Joanikije.  There’s no doubt that these events clearly raised strong feelings.  They also attracted extremists, in addition to foreign actors, who sought to exploit the enthronement for their own purposes, including seeking to destabilize the country and stoke societal divisions.

As polling has repeatedly shown, most Montenegrin citizens from across the political divides want their country to join the EU.  For Montenegro to take its rightful place alongside the free and democratic nations of Europe, those who believe in a multi-ethnic, inclusive, and democratic Montenegro must raise their voices and resist those who would divide their society along ethnic or religious lines.  It is for the citizens of Montenegro to determine their country’s future and shape their own destiny.

We urge the Montenegrin government to stay focused on achieving progress in the areas that will speed this country’s EU accession and increase stability and prosperity for every one of its citizens.  The areas that need attention and action are well-known:  strengthening the rule of law, confronting organized crime, and combatting entrenched corruption.  We commend recent successes in the security sector, including arrests in high-profile organized crime cases.  We also praise the efforts of the police to strike the right balance of civil liberties and public safety during the weekend of Metropolitan Joanikije’s enthronement.  At the same time, recent events have made it clear that Montenegro urgently needs a strong, independent, impartial judiciary to ensure that those who break the law are held accountable, regardless of their connections.

Religious issues absorb the attention of leaders on all sides of Montenegrin politics, and there is not enough attention paid to much more pressing issues.  The government must focus its energies on improving the quality of life for average Montenegrins.  This means better education and better health care – including bringing the pandemic under control.  If this country is to stem its pervasive brain drain, there must be more opportunities for hard-working, talented individuals to thrive.  Infrastructure needs to be enhanced to support economic growth that reaches all corners of the country.  And institutions need to be strengthened to ensure they enjoy the full trust of all Montenegrin citizens and effectively deliver the services for which they are designed.

We question the utility of a national census that collects data relating to ethnic identity at this time – certain political forces are cynically championing this undertaking, hoping it will further drive a wedge between those who identify as Montenegrin and those who identify as Serb.  How does this help the country move forward?

The United States, the UK, and other like-minded international partners stand ready to support a constructive dialogue, which should include both political actors and civil society representatives, reaching out across political, religious, and ethnic divides, to build trust and help to create a common vision to advance Montenegro along its Western path.  The success of such a dialogue will require significant political will and ultimately depends upon the people of Montenegro, not the international community.

We call on all those living in this country who are committed to building an inclusive, democratic Montenegro to do their part to lower the tensions and to engage in dialogue, from the community level to the top of the political leadership.  The time is now.