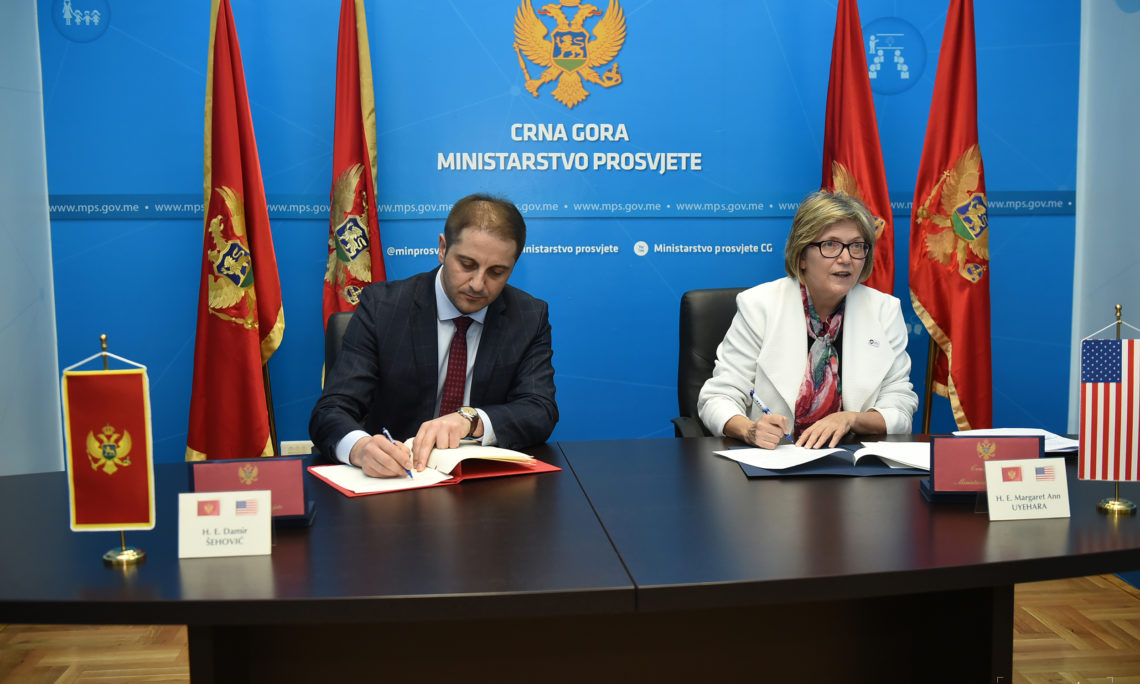 On March 2, Ambassador Uyehara and Minister of Education Damir Sehovic met to discuss bilateral cooperation in the area of education.  Ambassador Uyehara and Minister Sehovic signed a Memorandum of Understanding to strengthen and develop cultural ties between the United States and Montenegro through the Fulbright Academic Exchange Program.  The Memorandum details measures both partners will fulfill to ensure the Fulbright Program continues to facilitate exchanges between both countries.

The Fulbright Program is a two-way exchange supporting academic exchange.  Under the auspices of the programs, U.S. scholars and young English teaching assistants come to Montenegro to help local universities and high schools improve their educational services.  The program also sends Montenegrin scholars and students to the United States to complete research and to share information about Montenegro’s history and culture.

The Fulbright program plays an important role in strengthening the people-to-people ties between Montenegro and the United States, Ambassador Uyehara said.  “When Fulbrighters return home, they share their experiences with friends and family in their communities.  And that process inspires others to follow in their footsteps, seeking out opportunities to study abroad and bring positive change to our world,” the Ambassador remarked.

“The Memorandum seeks to improve cooperation between the educational, scientific and research institutions of Montenegro and the United States, which is indeed a significant step for Montenegro, especially considering that the Fulbright program is one of the most significant scholarship programs in the United States,” Minister Sehovic stated. “But apart from that, I am particularly pleased to announce another project that was the subject of today’s meeting with Ambassador Uyehara, which is the U. S. donation to Montenegro in providing funds for the reconstruction of four Montenegrin educational institutions in the value of over half a million euros,” Sehovic emphasized.

As the U.S. government’s flagship international educational exchange program, the Fulbright Program increases mutual understanding between the people of the United States and the people of other countries.

By concluding this agreement, the United States and Montenegro continue to promote cross-cultural relations.